It was nine years ago today that Timothy Treadwell died in the wilds of Alaska, killed by an unbridled passion for the wilderness,  and in particular, the animal he had dedicated his life to protect. You may or may not be aware of the story of Timothy Treadwell. Indeed, you may have seen Werner Herzog’s excellent documentary, Grizzly Man, and still been left wondering what kind of person Timothy was. If you haven’t, I highly recommend seeing it. 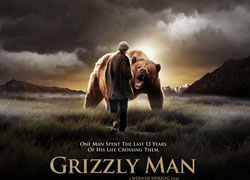 For thirteen summers Treadwell departed from civilisation (and some would say his senses) to live in Katmai National Park alongside his beloved brown bears. On the most part, he undertook this feat alone – although on that last, fateful trip he was joined by a female companion, Amie Hugenard.

It was a trip neither would return from.

Treadwell was a recovering alcoholic and drug-user. After surviving a near-fatal heroin overdose he dedicated his life to bears, believing it his mission to protect them and their habitat. He produced, directed and placed himself at the centre of his own unique documentaries – films he would later tour around schools with, educating children about bears and conservation of the wilderness. For this he never solicited a fee or any kind of recompense.

Most of the footage used by Werner Herzog came from Timothy’s tapes. Grizzly Man is as much a film about the human condition as it is a piece of nature photography, but even so, some of the footage shot by Treadwell is truly magical. At one point in the film he is seen playing with a family of foxes; in another, he is swimming with a grizzly – close enough to reach out and touch it. In fact, you will be amazed at how close Treadwell got to his subjects, apparently sharing a mutual trust with these wild predators.

The deaths of Treadwell and Hugenard are dealt with early in the film, which adds a greater poignancy to the footage as Herzog directs the action towards the fateful attack, one which Herzog himself listens to (Timothy’s video camera capturing the audio of the attack). Throughout the film Treadwell is heard to say, ‘I would die for these bears.” Bizarrely enough, Hugenard documented a fear of these animals in journals that were found at their doomed camp.

One thing that becomes clear from the film is that Timothy’s efforts polarised opinions. Some argue that Timothy Treadwell got what he was asking for, while others respected and admired him for his strength in beating addiction and surviving in such a harsh environment for thirteen years. Perhaps what he was striving for was a simpler way of life, the bear a token of the wilderness he craved. I think there is something in that for us all. And although he was killed by the one thing he endeavoured to protect, ultimately, it was bears that saved him.

With governments failing so dismally on the environment, maybe the world needs more people like Timothy Treadwell.

7 thoughts on “Grizzly End for the Grizzly Man”