For anyone who hasn’t seen the film, Catherine Trammal (Sharon Stone) was a writer. She drove a sports car and lived in a way cool house with way cool views over the Pacific Ocean. And damn it if I didn’t want that house. That sports car. That expert precision with an ice-pick. Hell, I was even willing to forego underwear to get it.

* you bet I just uncrossed my legs in the VLog edition of this post  (Okay, sorry. No-one wants that image in their head) * 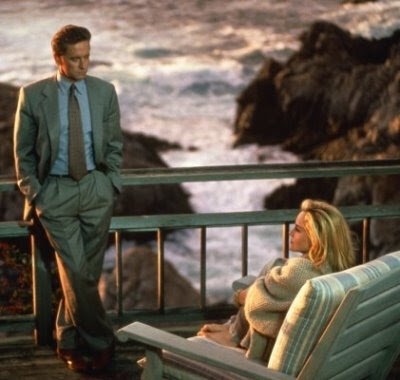 Like most other writers, writing is a passion–I’d be doing it whether I got paid or not. But to get paid for doing something you love…that’s the golden ticket? It’s what you dream about…when you’re not dreaming about all the bad shit you can do to your characters. And save for winning the lottery it’s the only way I’ll ever get that dream house on the Pacific.

I fell in love with California the first time I saw the Lost Boys, but it was a million miles from the agricultural backwater I grew up in in England. Luckily I had a good imagination. Hell, I used to roll a fantasy number in my head that I was the younger brother of Corey Haim and Jason Patric, or occasionally the Frog brothers. I turned Skegness into San Diego on daytrips to the coast. But that didn’t stop me wanting it for real. I longed to skate down sun-drenched boulevards in La-La-land, drink up the sunsets on Malibu beach, hike among the giant redwood groves, and yes, I wanted Yasmin Bleeth to rub vinegar into my jellyfish-stung legs…Yasmin, with the running…always with the running.

But writing is hard. Writing well is even harder. It takes years and years of dedication and practice, years of frustration and self-doubt, and even then there’s no guarantee you’ll make it. I wrote a novel in my early twenties. Well, kinda. It had a start, middle and end and everything. I sent it off to a major publishing house and, in my naïveté, was incredulous to receive a form rejection. Oh, foolish youth!

Still, I didn’t let it put me off. I still had my dream…correction, I still have my dream. But as far as becoming a successful writer goes I’m only just reaching for the first branches of that Redwood, nowhere near the top and those views of the blue, blue Pacific. But I won’t give up. Not ever. I’ll keep working at it, try to get better, and one day I’ll get there, even if I’m a drooling incontinent man in his nineties when I do.

Until then I’ll keep listening to the Doors and Lana del Rey. I’ll revisit the Lost Boys from time to time, Basic Instinct and the Big Lebowski. I’ll keep on California Dreaming because for me it is El Dorado. The Golden State. Like Lana says:

“Baby, if you wanna leave

I’d love to hear your reasons for writing, you dreams and goals, so please share in the comments 😀