It was a cold January day and there was nothing to do. The usual drivel was airing across the morning TV schedules, and it would be hours until my flat-mate Benny was home.

I had to get out, do something with my time off.

The sky was grey and it couldn’t decide whether to rain or snow. I trudged through the sleet, to the flea market in Camden Lock, and spent a couple of hours browsing through a second-hand bookstore.

Boy was there some junk in there. I mean, who in their right mind would pay a pound for a tatty copy of the Hound of the Baskervilles that’d been knocking around since 1902? Not me, I can tell you. Nope, there were better things to be had for a pound and Ronald McDonald had a hamburger with my name on it.

It was full on snowing when I left the market, but the window display of a travel agent glimmered like a sparkling oasis. It promised low, low prices for winter sun, and boy could I use some of that. I’d been storing up my holiday entitlement to exchange for cash, but they’d changed the policy on that. And now I was stuck with the prospect of more days off like this; that or forfeit it altogether.

I decided to check out their special offers and that’s when things started to go wrong.

For a start, there was no one there; no stands, no desks, nothing. Just blank walls and seven doors.

When I turned round to leave, the door I came in had gone. I’d seen enough episodes of the Twilight Zone to know that that was a bad sign. That viewpoint was only strengthened when a voice from above said, “These seven doors lead to seven places: Narnia, Neverland, Wonderland, Hogwarts, Camelot, Middle Earth, and Westeros. Choose one.”

I knew for a fact that Thomas Cook wasn’t flying to any of those destinations.

I felt stupid for talking to thin air, but there was not a lot else I could do. I asked what kind of place this was.

“The Travel Shop of Mystery.”

And I’m glad I did, cos that sure cleared that up. Mystery? Yes. Imagination? No.

“And you want me to go through one of those doors?”

“You must choose, but choose wisely.”

I considered my options, and they were few.

“Don’t you at least have a brochure?”

“No. You have until the sand run outs to choose, but choose wisely.”

For a bodiless voice he could go on.

An egg-timer appeared in the middle of the floor. I was starting to think this was no ordinary travel agent. “Look, I can’t just take off like that. I’m only supposed to have an hour for lunch.” I felt bad about lying, but I was getting kinda peckish.

Half the sand had run-out. I looked for hidden cameras and considered whether or not to deck the zany TV host when he revealed himself. But there were no cameras that I could see, and no amount of CGI could have made the shop door disappear like that.

I studied the doors again.

I’d always wanted to go to Narnia when I was little – or was that Neverland? – you see, I was a big Michael Jackson fan back in the day. Hogwarts didn’t appeal – I’d never got past the fourth of the Harry Potter films. Middle Earth? That was basically New Zealand with hobbits and elves, which left Camelot and the Welsh retirement home.

This would have been a whole lot easier if I could’ve just gotten on Trip Advisor.

The sands of time were almost up. I made a choice based on the logic that, of the seven, six of the destinations were fantasy worlds, while the last was probably, no…possibly a retirement village in Wales.

I bolted through the door with the dragon on and found myself in a green and pleasant land of hills and valleys. It had to be Wales. Now all I had to do was find the clubhouse and take the old darlings for all they were worth in a cash game of dominos.

I have to admit I was a little lost, but thankfully I stumbled on a ‘little person’ (to be politically correct) who was more than happy to show me the way. Had a funny sounding Welsh name, too. What was it again? Oh, that’s it…

This story is a response to the writing prompt ‘Seven Doors,’ for Kellie Elmore’s #FWF Free Write Friday. It’s a great idea for letting the creative juices flow, and I had a lot of fun writing this one. 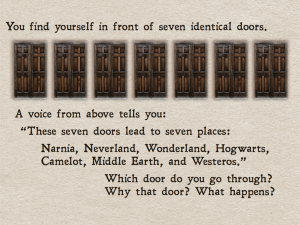