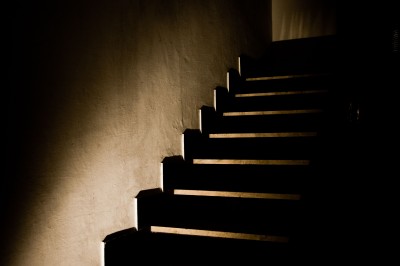 With Halloween just passed and long dark nights upon us, it’s a time of year that really whets the appetite for things macabre and frightening.

Autumn is the season of long shadows and withering sunsets, grey days and sullen skies; a time to hunker down indoors, out of the cold, and allow the machinations of our mind to rattle at the windows like an ill wind.

So why is it that we like to be scared?

In a world without illumination, our primitive ancestors would have had many things to fear. Over time, and with the advancement of science, fewer things remain unexplained; there is less to excite or terrify us. In the most part, our modern lives are very comfortable, which is why we turn to fiction or film to provide us with a quick fix of terror. It’s not that we want to find ourselves stalked by vampires and werewolves, or haunted by malevolent spirits – it’s that the voyeur in us would like to entertain curiosity and suspend disbelief, momentarily, to allow our deep-rooted fears to the surface again.

I made a half-hearted attempt to research the science behind fear, but it was all a bit boring in that context -except for the adrenaline/dopamine bit? (see, I wasn’t really paying that much attention to the science bit). So, in quick summary: processing danger involves chemical reactions in the brain – fight or flight responses, the very stuff that helped our evolutionary process; one could say the essence of life itself – fear and ultimately survival. By fearing death and all things gruesome, it makes us feel more alive, and by forcing the boundaries of perceived existence we unlock possibilities that go against the grain of understanding that  tethers us.

As a writer you have to believe in what you’re writing, and by extension (especially in speculative fiction) believe in more than the world can actually offer. We need to retain an almost childlike sense of awe and wonder in order to convey our readers (when we eventually get some!!!) into worlds imagined, and take them on a journey that both enlightens and enhances their lives.

And this is what I want as a reader, too. I want to feel the hairs on the back of my neck tingle from time to time; I want to shackle the skeptic inside me and just wonder, maybe with a twinge of dread, if there might be something unworldly lurking in the shadows.

So turn off the TV, get out the candles and a scary book, and transport yourself into parts of the mind you rarely venture anymore.

Oh, and when you have, come back here and let me know what scares you.

2 thoughts on “Fear of the Dark”